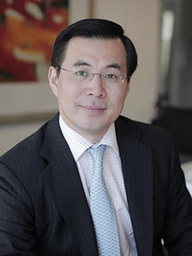 Professor Guang-Zhong Yang (FREng, FIEEE, FIET, FAIMBE) is Dean of the Institute of Medical Robotics, Shanghai Jiao Tong University (SJTU); he is also co-founder and was director of the Hamlyn Centre for Robotic Surgery, Imperial College London, founder and editor-in-chief of Science Robotics, Chairman of the British Association of Robots and Automatic Control Systems, and was a member of the World Economic Forum’ s Global Agenda for Artificial Intelligence and Robots. Professor Yang was awarded a CBE and honored as FREng, FIEEE, FIET, FAIMBE, FIAMBE, FMICCAI, a recipient of the Royal Society Research Merit Award and listed in The Times Eureka ‘Top 100’ in British Science. He is hired as a visiting professor of Shanghai Jiao Tong University and served as founding dean of the Institute of Medical Robotics. Currently he is appointed full time as chair professor of Shanghai Jiao Tong University.

Professor Yang’s main research interests are in medical imaging, sensing and robotics. In imaging, he is credited for a number of novel MR phase contrast velocity imaging and computational modeling techniques that have transformed in vivo blood flow quantification and visualisation. These include the development of locally focused combined with real-time navigator echoes for resolving respiratory motion for high-resolution coronary-angiography, as well as MR dynamic flow pressure mapping for which represents a paradigm shift of learning and knowledge acquisition of motor and perceptual/cognitive behaviour for robotics, as well as the field of Body Sensor Network (BSN) for providing personalized wireless monitoring platforms that are pervasive, intelligent, and context-aware. He has published over 300 peer-reviewed publications, edited over 10 books/conference proceedings, numerous research/best paper awards, and a large research grant portfolio from the UK/EU funding bodies, research charities, and industrial sources.

FIET, Fellow of The Institute of Engineering and Technology (formerly IEE)

FIEEE, Fellow of the Institute of Electrical and Electronics Engineers

FAIMBE, Fellow of the American Institute for Medical and Biological Engineering

FIAMBE, Fellow of the International Academy of Medical and Biological Engineering

FCGI, Fellow of the City and Guilds Institute.