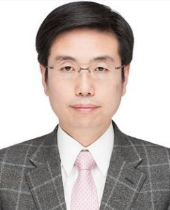 Jaesung Hong received the Ph.D. degree in Frontier Science from The University of Tokyo, Japan in 2004. After Japan government postdoc program (JSPS) , he worked as an assitant and associate pro- fessor at Medical School of Kyushu University, Japan. He is now a full professor of Department of Ro- botics Engineering, DGIST, South Korea. His research interests include image-guided intervention, and surgical robotics.

At the University of Tokyo, he has developed the first US-guided needle insertion robot tracking a movable and deformable organ (Phys in Med and Biol, 2004). While he worked at Kyushu University Hospital in Japan, he developed original surgical navigation systems, and clinically applied them in vari- ous surgeries (IEEE BME 2008).

After moving to DGIST, a research-oriented special university established by the Korean government, he developed a portable, AR-based surgical navigation system in collaboration with major hospitals of Korea, including Samsung Medical Center and Hyundai Asan Medical Center.

He has been a board member of Korean Society of Medical Robotics, and Asian Society of Comput- er-aided Surgery. Since 2016, he has joined the IEEE/RAS technical committee on surgical robotics as a co-chair.