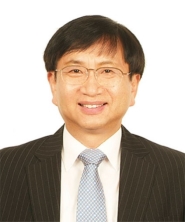 Dong-Soo Kwon is a Professor in the Department of Mechanical Engineering at the Korea Advanced Institute of Science and Technology (KAIST), Director of the Human-Robot Interaction Research Center, Director of the Center for Future Medical Robotics.  He is serving the IEEE Robotics and Automation Society (RAS) as a member of the Administrative Committee (AdCom).  In addition, He is the founder CEO of EasyEndo Surgical Inc., Chairman of the board of directors of Korea Institute of Robot and convergence (KIRO), and Academician of National Academy of Engineering of Korea (NAEK).

His research deals with Medical Robotics, Haptics, and Human-Robot Interaction. He has contributed to the advancement of several robot venture companies by technology transfer. Recently, he has established a start-up company based on his medical robot research results.

He had worked as the Research Staff in the Telerobotics section at Oak Ridge National Laboratory from 1991 to 1995. He was a Graduate Research Assistant in Flexible Automation Lab. at Georgia Institute of Technology from 1985 to 1991, and the Section Chief, Manager at R&D Group of Kanglim Co., Ltd from 1982 to 1985. He received the Ph.D. in the Department of M.E. at Georgia Institute of Technology in 1991, M.S. in the M.E. at KAIST in 1982, and B.S. in the M.E. at Seoul National University in Korea in 1980.

Introduction to medical robotics and

Humanity has been desiring for healthy and long life, and this motivated the development in medicine from ancient diagnosis to modern robotic surgery. This lecture introduces history of medicine as well as the modern trends in surgical robotics in various surgical field. KAIST has been developing medical robots in laparoscopic, endoscopic, and microscopic surgical fields, and the journey of our medical robot research is introduced as well.

Teleoperated surgical robot system enables surgeon to perform complex surgical tasks in remote environments. How the surgeon feels the remote surgical environment in a teleoperated system is important, and to deal with this problem, consideration on both transparency and stability issue is necessary. In addition, in order to achieve accurate and stable control of surgical robot, the effect of friction, gravity, vibration and hysteresis on robot manipulator should be compensated. This lecture introduces fundamental concept of transparency and stability issues in teleoperation. Representative compensation approaches for friction, gravity, vibration, and hysteresis are presented as well.