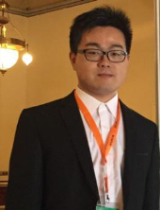 Lei Ma received his master degree from Robot Institute of Beihang University in robotics, and doctoral degree from The University of Tokyo in bioengineering field in April 2018. His research interests include image guided surgery, medical robot, medical image analysis, and computer vision and AI in medical field. In master course, he and his team proposed a robotic solution for automatic dental preparation using femtosecond laser, which is the first attempt in this field. In PhD course, he developed a surgical navigation system to guide pelvic lymph node dissection in rectal cancer. He proposed to use laparo- scopic vision to track laparoscopic ultrasound probe to replace the external tracking system, and cre- atively utilized local phase to accurately segment the artery from ultrasound image. Currently, he is working in Computer vision lab of Lenovo research in Japan as a staff researcher.

Abstract：
Laparoscopic pelvic lymph nodes dissection (LPLND) in rectal cancer surgery is a delicate stage be- cause pelvic arteries which need to be located first to guide the dissection are generally covered by other tissues and miss on the laparoscopic view. If pelvic arteries aren’ t located accurately, the risk of wounding arteries rises, and surgery duration will also be prolonged.

Experiment was first carried out to evaluate the accuracy of the vision based probe tracking system, and the average reconstruction error of 10 measurements is 2.43 mm. To verify the feasibility of the pro- posed navigation system for LPLND, phantom experiment was performed. Average navigation accuracy obtained in phantom experiment was 2.26±0.95 mm. In animal experiment, the navigation system was successfully built in laparoscopic surgery. After laparoscopic surgery, open surgery is performed to expose the pelvic artery, and the navigation system is constructed to overlay the registered CT artery model onto exposed artery to verify the accuracy of the system. The result of open surgery showed that the match of overlaid artery and exposed artery stratified the surgical requirement, which has been con- firmed by surgeons. Therefore, the feasibility of the proposed system in in-vivo environment was veri- fied.