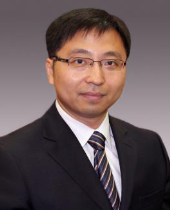 Li Zhang is currently an Associate Professor in the Department of Mechanical and Automation Engi- neering at The Chinese University of Hong Kong (CUHK). He received the Ph.D. degree from the Uni- versity of Basel, Basel, Switzerland, in 2007. And then, he joined the Institute of Robotics and Intelligent Systems, Swiss Federal Institute of Technology (ETH) Zurich, Switzerland as a postdoctoral fellow until 2009, and as a senior scientist from 2009 to 2012. He joined CUHK as an Assistant Professor in 2012.
His main research interests include micro-/nanorobots and their biomedical applications. He won the Hong Kong Research Grants Committee (RGC), Early Career Award in 2013, and CUHK Young Re- search Award 2017. Dr. Zhang is a senior member of IEEE, who has won several awards from IEEE international conferences. Since 2004 he has authored and co-authored over 160 papers, including Sci- ence Robotics, Nature Communications, Science Advances, as the corresponding author.

People have envisioned tiny machines and robots that can explore the human body, find and treat diseases since Richard Feynman’ s famous speech, “There's plenty of room at the bottom,” in which the idea of a “swallowable surgeon” was proposed in the 1950s. Even though we are at a state of infancy to achieve this vision, recent intense progress on nanotechnology, MEMS/NEMS technology and micro-/nanorobotics has accelerated the pace toward the goal. A number of research efforts have been recently published regarding the development of tiny swimming machines/robots from the basic princi- ples and fabrication methods to practical applications.
I will present the recent research progress in my lab on using magnetic swimming microrobots for bio- sensing and targeted delivery [1-6], from the design, manufacturing, functionalization and remote con- trol, to perspective of using these small agents for biomedical applications in vitro and in vivo.