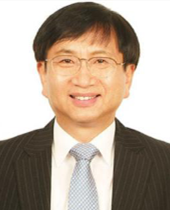 Dong-Soo Kwon is a Professor in the Department of Mechanical Engineering at the Korea Advanced Institute of Science and Technology (KAIST), Director of the Human-Robot Interaction Research Center, Director of the Center for Future Medical Robotics. He is serving the IEEE Robotics and Automation So- ciety (RAS) as a member of the Administrative Committee (AdCom). In addition, He is the founder CEO of EasyEndo Surgical Inc., Chairman of the board of directors of Korea Institute of Robot and conver- gence (KIRO), and a member of National Academy of Engineering of Korea (NAEK).

His research deals with Medical Robotics, Haptics, and Human-Robot Interaction. He has contributed to the advancement of several robot venture companies by technology transfer. Recently, he has estab- lished a start-up company based on his medical robot research results.

He had worked as the Research Staff in the Telerobotics section at Oak Ridge National Laboratory from 1991 to 1995. He was a Graduate Research Assistant in Flexible Automation Lab. at Georgia Insti- tute of Technology from 1985 to 1991, and the Section Chief, Manager at R&D Group of Kanglim Co., Ltd from 1982 to 1985. He received the Ph.D. in the Department of M.E. at Georgia Institute of Technol- ogy in 1991, M.S. in the M.E. at KAIST in 1982, and B.S. in the M.E. at Seoul National University in Korea in 1980.

This talk will present research on flexible surgical robotics of KAIST center for future Medical robotics. We believe that surgical robots should be developed considering the benefits to surgeons with easy and intuitive control, to patients with minimum invasiveness and fast recovery, and to hospitals with afford- able cost and reduction of surgery time.

In order to meet these requirements, firstly, EasyEndo has been developed for solo-endoscopic pro- cedures. By attaching a motor pack to a conventional endoscope, EasyEndo allows easy and intuitive endoscopy without assistants. Second, Portable Endoscopic Tool Handler (PETH) has been developed for more advanced procedures with additional surgical arms attached to the conventional endoscope. Several ex-vivo experiments have shown the improved performance of conventional endoscope and the feasibility of PETH. Third, K-FLEX has been developed that can perform dexterous robotic surgery through a flexible pathway by adding small robot arms to the flexible endoscope. An attractive feature of these robot arms is that they can exert a great deal of force to lift organs and tissues with specially de- signed constraint joint mechanism. Several bench-top tests and in-vivo animal experiments had shown effectiveness and feasibility of K-FLEX on endoscopic procedures. Its technical superiority and potential for clinical use were evaluated highly that K-FLEX had won Overall Winner and Best Application Award at Surgical Robot Challenge 2018. With these robot technologies, we believe that surgeons and endos- copists can conduct a challenging surgery that has not been tried before.

Based on our research experience over the last 20 years, we are planning to commercialize our research outputs. Our flexible robot technologies will extend endoscope application from conventional endoscopy procedure to robotic surgery.