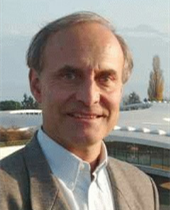 Hannes Bleuler obtained his MS in electrical engineering at ETH Zurich in 1978 and his PhD in Mechatronics at ETH in 1984.
He then spent two years at Hitachi in Japan (Mechanical Engineering Research Lab), and at Tokyo Institute of Technology. 1987-1991 he was senior researcher and lecturer at ETH. He introduced signal processor control for active magnetic bearings (AMB) and he is co-founder of MECOS-Traxler AG, Win-terthur, a provider of AMB technology.
In 1991 he became Professor at the Institute of Industrial Science of The University of Tokyo (Toshiba Chair), and then as regular professor of The University of Tokyo.
Since 1995 he is full professor of at EPFL (Swiss Federal Inst. of Technology) in Lausanne, with biomedical robotics (rehabilitation, exoskeletons, robotic surgery) as main activity. In collaboration with Prof. Miguel Nicolelis, he has co-authored two articles in Nature and his lab has lead to many spin-off companies in the bio-medical technology domain. He is member of the Swiss Academy of Technical Sciences and of IEEE, fellow of the School of Engineering of The University of Tokyo.

In the last few years, several exoskeletons have been developed by our group. The most advanced project is for a complete spinal cord injury (SCI) patient (T10), in the wheel chair after an accident in 2007. In 2016 she could walk again upright for the first time with the exoskeleton « TWIICE », participated in Cybathlon 2016 and won by a large margin the first place in the 2017 edition. For SCI patients, crutches are not only used for balance and directional control, but also, essentially, as sensing device. The disembodied lower limbs need to be kinematically constrained. These specifications are almost at the opposite of the needs for patients of muscular dystrophy. In this second case, haptic sensing is fully present and the exoskelton is here to complement residual muscular strength. The upper body is weakened, therefore crutches are not desirable. This has strong consequences on the basic design of such exoskeletons (need for lateral balance as well as sagittal). Such conflicting demands for exoskeletons will be discussed in the light of several realized exoskeleton devices.