Because minimally invasive surgery is increasingly used to target small lesions, demand is growing for miniaturized tools—such as microcatheters, articulated microforceps, or tweezers—that incorporate sensing and actuation for precision surgery. Although existing microfabrication techniques have addressed the construction of these devices, accurate integration and functionalization of chemical and physical sensors represent major challenges. This paper presents a microrobotic platform for the functionalization of fibers of diameters from 140 to 830 micrometers, with a patterning precision of 5 micrometers and an orientation error below 0.4°. To achieve this, we developed two 2 millimeter–by–3 millimeter, 200-micrometer-thick microrobots to align floating electronic circuits on a fiber during a wet transfer process. The position and orientation of the microrobots were controlled at the air/water interface by a permanent magnet. The stiffness of the position controlled was 0.2 newton millimeter, leading to an average force of 0.5 newton. The nonhomogeneous magnetic field of the magnet, associated with different preferred magnetization directions recorded in the microrobots, allowed the distance between the two microrobots to be precisely controlled. This extra degree of freedom was used to control the microrobot pair as a tweezer to grab and release floating electronic patterns, whereas the others were used to align the pattern position and orientation with the fiber. A model of this control, as well as the microrobots’ interaction through surface tension, is proposed. Detailed performance validation is provided, and various exemplar sensor embodiments on a 200-micrometer-diameter fiber and three-dimensional devices are demonstrated. 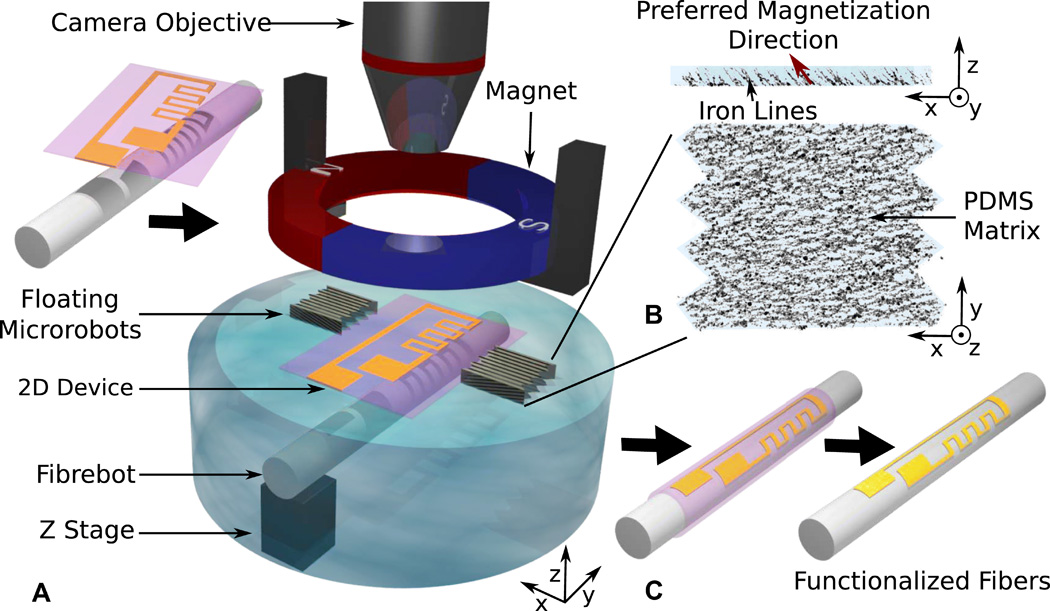 Setup of the microrobot-assisted high-precision wet transfer. (A) Magnetically controlled microrobots via an external magnet to align a floating 2D device on a target substrate (e.g., optical fiber and 3D microdevice). (B) View of the microrobot structure in which iron lines trapped in an elastomer matrix are used to store a preferred magnetization direction. (C) Final assembled devices featuring the functional pattern aligned with a 5-μm and 0.4° precision.