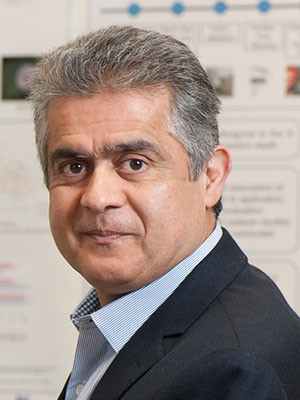 In this talk I will present a series of work done at the Chair for Computer Aided Procedures (CAMP), which use AI, Computer vision, Robotics and Augmented Reality, to provide novel solutions for computer assisted interventions. After a short presentation of our work on AI for Covid analysis and for supporting remote management of ICU, I focus on modelling surgical procedures.  I will end the talk with our recent work on robotic imaging and augmented reality. For further information on our acitivities please visit: medicalaugmentedreality.org and camper.in.tum.de

Nassir Navab is a full professor and director of the Laboratories for Computer Aided Medical Procedures (CAMP: http://campar.in.tum.de) at Technical University of Munich (TUM) and Johns Hopkins University (http://camp.lcsr.jhu.edu/) with secondary faculty appointments at both Medical Schools. He is also the director of Medical Augmented Reality (http://medicalaugmentedreality.org/) summer school series at Balgrist Hospital in Zurich. In 2001, while acting as distinguished member of technical staff at Siemens Corporate Research (SCR) in Princeton, he received the prestigious Siemens Inventor of the Year Award for the body of his work in interventional imaging. He also received the SMIT Technology Award in 2010 and IEEE ISMAR 10 Years Lasting Impact Award in 2015. He had received his PhD from INRIA and University of Paris XI in France and enjoyed two years postdoctoral fellowship at MIT Media Laboratory before joining SCR in 1994. He is Fellow of the MICCAI Society and acted on its board of directors from 2007 to 2012 and from 2014 to 2017. He has been serving on the Steering Committee of the IEEE Symposium on Mixed and Augmented Reality since 2001. He is the author of hundreds of peer reviewed scientific papers and 50 granted US and over 80 international patents. He served as General Chair for MICCAI 2015, ISMAR 2001, 2005 and 2014. He is a funding board member of IPCAI 2010-2021 and Area Chair for ICCV 2022 and ECCV 2020. He is on the editorial board of many international journals including IEEE TMI and MedIA. He is proud of his PhD students, who have received over 50 prestigious awards including MICCAI young investigator awards in 2007, 2009, 2010, 2012, 2015, 2016, 2017 and 2018 and best paper awards at IEEE ISMAR 2005 and 2017, MICCAI MedIA 2016 MICCAI IJCARS 2016 and 2019, IBM best paper award at VOEC-ICCV 2009, IPMI Erbsmann award in 2007 and best poster in 2019, and IPCAI best paper awards in 2014 and 2020. As of June 2021, his papers have received over 42690 citations and enjoy an h-index of 92.