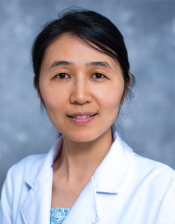 Prof. Jixian Wang is a rehabilitation physician of Ruijin Hospital, she graduated from Shanghai Jiao Tong University with a doctorate in neurology. During her doctoral studies, she mainly focused on the treatment and mechanism of small cerebral ischemia, including the application of various imaging methods such as laser speckle, synchrotron radiation, mocro CT and two-photon to study the collateral circulation after cerebral ischemia, and using stem cells, immune cells and gene therapy to promote the brain’s recovery after ischemia, etc. Her current research direction is neurological rehabilitation and its mechanism, including the application of transcranial direct current, transcranial ultrasound, and other non-invasive brain stimulation techniques to promote brain function remodeling after cerebral ischemia. She has published more than 10 SCI articles in a series of works or co-authors and wrote the chapter "Post stroke motor rehabilitation" in the Springer series. In 2016, she was supported by the "Transportation Cross-Section Project" of Shanghai Jiao Tong University. In 2017, she won the "Guangci Excellence Youth" award. Her current brain stimulation technology research is supported by the 2018 National Natural Science Foundation Youth Project.